Supervillanos : from mobile to TV 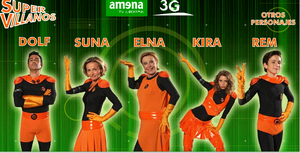 A funny super-hero show about a family in which every member has super-powers.
They’re not the “I’m gonna save the world, help the poor” type of super-heroes but enjoy their powers as we would all do.

The show is funny and became popular.

It was made to help 3G to raise on the spanish carrier. and it succeeded.

It became so popular that it moved from the mobile to the TV world.

This season La Sexta (an HBO-like tv station in Spain) shows a TV version of Supervillanos.

We saw mobile-edited versions of TV-shows (remember the unsuccessful 24 for mobile on Vodafone), for the first time a show moves from mobile to TV.